Missouri is suing the Chinese government and other top institutions for the role they played in the coronavirus pandemic and the effects it has had on the state, accusing the country of covering up information, silencing whistleblowers and doing little to stop the spread of the disease, Missouri Attorney General Eric Schmitt announced Tuesday. 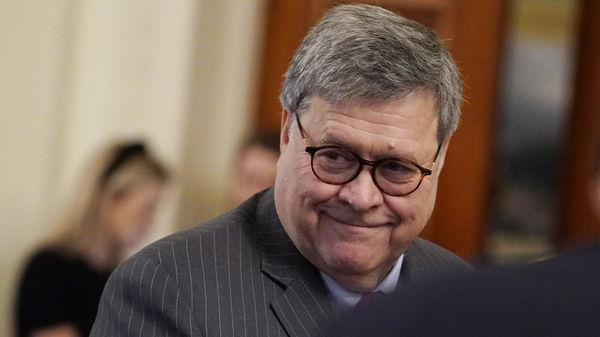 The attorney general himself must approve opening a case into an active presidential race. President Trump and supporters have decried what they’ve called bias by the FBI during the 2016 campaign.

Just when you think you have all your ducks in a row, you realize, NO! There’s an untapped area of trauma that needs excavating. Undiscovered pain, memories and horror that kinda creep up on ya at the most unexpected and inopportune times. Like in the hospital. That’s what happened to me this week.

They didn’t know what to do with me. The medical staff sat around, chin-in-hand, staring deeply into my eyes, trying to figure out what in the world was wrong with this too-young-to-be-ill woman. So, not knowing particularly what else to do with me, they packed me off to ER where, after four hours of cooling-my-heels while thoroughly enjoying watching M*A*S*H, I was finally discharged with a diagnosis of…pretty much, nothing.

Nothing, that is, except White Coat Syndrome. Sheer, bloody terror. The kind where (last week) the simple “donut” of the CAT scanner triggered my fight-or-flight, do-I-have-an-exit-plan-in-case-there’s-a-fire-alarm-and-they-abandon-me-in-here PTSDesque sheer panic.

But from whence does it come? That’s what I wanted to know. Why did I flip from a damn-the-torpedoes-full-speed-ahead brave woman into a frightened little girl at the sight of a White Coat. (Although none of the medical staff were actually wearing a White Coat, per se.)

Then it all came back to me. Filtering down through the years, memories all centered around medical traumas. My experiences. Other people’s horror stories. Lots of ’em.

Now, just in case you think “Ah, she’s just a wuss in general” let me disabuse you (and myself) of that notion right now. First, the sight of blood doesn’t bother me in the slightest. Secondly, where most people loath and fear the dentist, I absolutely adore going to the dentist. It’s like a massage for your mouth. Teeth cleanings are the most relaxed I ever get.

No, it’s definitely from-the-neck-down medical procedures that freak the heck outta me! And probably many of you!

I don’t know about you, but I got sick as a kid…a lot. Mother remembers that I had a new cold every other week in First Grade. Maybe it was from being so sheltered until First Grade. Maybe I had a weakened immune system from all the antibiotics I received as a newborn in Intensive Care. I was constantly sniffling, blowing and coughing.

In my family, going to the unfriendly, impatient, condescending doctor always seemed like A Big Deal. There was much debate in the family. Should we take her in? Shouldn’t we? And with only one car for much of my growing-up time, Dad had to take time off from work to bring me to the doctor.

I remember sitting in clinic waiting rooms. Dad didn’t really speak or look at me. He seemed so distracted with his important job. I felt horrible for being such a problem, a bother because, once again, I was sick and he had to take time from his busy career to tend to me. Need I mention I’ve been codependent from the age of four!?

Not only that but he had special names for me when I was sick: “germbag” was his favorite. And my coughing drove him crazy. (But to be fair, when he got sick his own inability to “control his cough” drove him crazy too. Once he flew into a rage at his own coughing, tried to jump to his feet and passed out cold on the floor instead. Very dramatic stuff.)

My first medical trauma came when I was five. Now, I was raised to be a little lady. So I knew it was just plain wrong when the technician stripped off my shirt and start running his ice-cold ultrasound probe across my chest without the curtains of my room wide open so anyone walking by could see my nakedness. Trauma #1.

My second medical trauma came when I was twelve and experiencing recurring ear infections. For a reason known only to themselves, the staff at the clinic decided to do a hearing test during the infection. But they were so inept, they repeatedly jammed this rubber “mushroom” into my excruciatingly sore ear canal, over and over again. It was pure agony. Memorable trauma. But that didn’t stop my parents from, inexplicably, forcing me into another hearing test at eighteen, against my loudly expressed wishes. My feelings, my trauma, my fear, my ownership of my own body, my boundaries simply didn’t matter.

That experience led to a period where my family eschewed antibiotics in favor of raw garlic. Have you tried it? It burns all the way down. That, in itself, was more medical trauma.

But the final straw came during my final scoliosis appointment. Not trusting doctors and fancying themselves to have great medical wisdom, as most narcissists do, I was forced to undergo a physical examination at home first.

Mom trapped me in a corner of the kitchen, grabbed my blouse and stripped me naked from the waist up. Fashioning a kind-of bra with a towel and masking tape, she marched ashamed, abashed, horrified pubescent me into the living room for the fatherly spinal examination because, you now, the doctor might “miss something.” Trauma, trauma, trauma.

The next week, I had my much-feared appointment with the proper scoliosis doctor. But, as luck would have it, he was accompanied by the cutest medical student (male) who smiled warmly at me. Given the option of having him step out in case his presence embarrassed me, my parents stayed silent. The cowards!!!

After all their promises that the doctor was a middle-aged man with children of his own to calm my nerves about taking my clothes off in front of a stranger, they allowed a young, cute, smiley man to stay in the room with half-naked me — when a recourse to stay my blushes was offered to them. Trauma, trauma, trauma.

Things didn’t get much better after I reached adulthood. I still debated terribly about taking myself to the doctor. I didn’t want to waste his time if I wasn’t really, really, really sick. It didn’t help that I got blamed and shamed every time I got sick. My parents wanted to know what I’d done wrong. Wasn’t I being careful about germs? Wasn’t I getting enough sleep? I was blamed for exposing my dad to my germs, because chemo had harmed his immune system. In time, I came to equate getting a head cold with practically being a murderer. It all got very, very old!

Added to my own trauma were all the horror stories bandied about. All the collected fears and terrors my family seemed to enjoy amassing. Stories of unnecessary medical procedures. The horror of mammograms. Speculums. Pedophile pediatricians. “Rape” by doctor. A shoestring relative who had her bladder ruined by medical error (being forgotten during a radiation session.) The stories were endless. Doctors were sneered at behind closed doors.

At least I had medical care and I’m grateful for it. My poor husband barely had any medical care growing up. That’s another kind of medical trauma. Neglect! He was left to suffer hours and hours of appendicitis agony, before his parents finally took him to hospital with the dire threat of a whooping if it was nothing. I guess it actually was a blessing that he had appendicitis, so he didn’t get that whooping. But they never missed a chance to “rub in” how much his surgery cost them. There’s a word for people like that, but it’s not spoken aloud in polite society.

Let me put it like this: How could I, and you, not freak out at the hospital when “medical” and “trauma” are synonyms in our consciousness!?! When “medical” means having your physical boundaries violated…a violation all too familiar at the hands of our boundaryless narcissistic families? What a trigger!

The surprise would be if we remained cool-as-cucumbers.

Calm is the one thing you can’t accomplish with teeth-gritted, hands-in-fists effort. That may work for a lot of things that required courage, drive and determination. But it’s not how you achieve serenity. Me? I don’t mind blood at all. But when they start having The Body Mass Index (BMI) Talk…I just burst into tears!

Medical procedures are unpleasant for everyone. But a big part in mitigating your White Coat Terror, is to figure out where it’s coming from. To exorcise all those past memories. To watch your future medical procedure being done on YouTube so you know exactly what’s going to be done to you. To realize that the medical profession, at least at my hospital, has come a long way. Gone (mostly) are the days when some doctors had the bedside manner of a rhinoceros. All the doctors and nurses at my local hospital are Minnesota-Nice-on-Steroids. They remember you from one visit to the next. They even give hugs!

Don’t underestimate the power of skin-on-skin contact! The nurse rubbed my arm during my CAT scan and it really diffused my claustrophobia!

Me? I got lucky this week. I got to have a dress rehearsal. A dry run. The next time I end up in hospital, I’ll be much calmer. Take it in my stride because I know what to expect and who I’ll be seeing. I’m not scared anymore. Well, not much. Not as much. Just a little bit.

But that doesn’t mean I have to like it!!

The presidential candidate for Zimbabwe's main opposition accused the ruling ZANU-PF of trying to steal the general election.